It's in the genes

I didn't even know he knew how to play Hangman.

"Yes, Mommy, I know, I knooooow. You don't have to teach me. I've seen you do it with your students before and I've played with Sofia a couple of times."

"Ok, Ben, but then don't you want me to go first? How are you going to know how to spell the words? And what if you can't think of anything?"

Then he busts out with this: 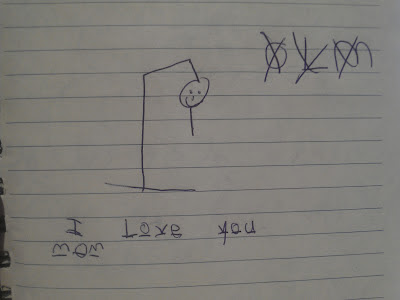 I'm not sure if the grin on my face was more from his message or the fact that he whipped it out without hesitation, informing me first that "It's 4 words."

For Round 2, the only explanation he gave is that he's "not really sure how to spell it" so he's "gonna do it the way he thinks it sounds." 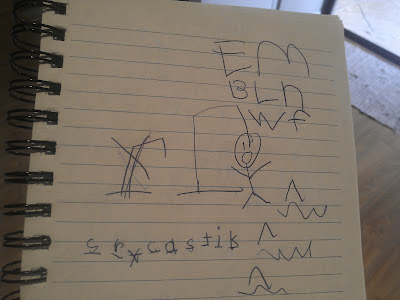 For those of you not fluent in "invented spelling," that's SARCASTIC for ya.

As if that weren't enough, he hung me with it, too.


What kind of kindergarten graduate comes up with "sarcastic" for Hangman?!?

When I told the story to some of my friends and family, they just chuckled and said things like "Figures," and "I'm not surprised," and "So there you go." I don't know why we are ever surprised by Ben's personality; he is nearly exactly like us in so many ways.

It's like if now, all of a sudden, we have another partner in crime. It's not just the two of Us anymore, now we've got another one on the team.

And it's pretty cool.

For Father's Day, one of the gifts we had gotten Hubby was a book I knew he had really wanted. A few days before Father's Day, Hubby does what he often does right before a gift-receiving occasion: announced out of nowhere that maybe we would all go to Barnes and Noble the next day to hang out and shop because there was a book he really wanted to get. (It almost never fails: whether it's a book or a $3000 bike, Hubby's impatience usually kicks in and he gets himself whatever I got him.)

But this time, I had someone else on my side.

Ben stops with his cereal spoon midway to his mouth and (almost) subtly looks over at me. We make eye contact across the table, and I realize that he got it. He gets it enough, in fact, that he says nothing over breakfast, but comes immediately over to me in my room when we are done. He whispers: "Mama, we can't let Daddy go to Barnes and Noble!"

Between the two of us we devise a plan to get Daddy home and avoid the bookstore altogether, and the next day, the boys and I surprise Hubby with breakfast in bed (Ben's idea) and a bag filled with gifts, including the book he really, really wanted.

It's kind of odd, this shift we have felt from baby to full-fledged kid. And a smart, funny kid, at that...one who can actually be part of the conspiracies, instead of have them explained to him all the time.

It's funny, because waaaaaay back in the days before kids, one of our biggest concern was our "cocoon." We used to say that we had this little cocoon of two, and we were very hesitant to let anyone else in. We liked each other so much, we weren't sure how we were going to handle having to share each other with someone else. (And don't get me wrong; there are definitely plenty of days when we would like nothing more than to throw the kids out the window drive-by style at the grandparents' house.) "Can you imagine?" we would ask each other. "We're gonna have a whole little person around here, another human being, sharing our space, our home, our life, our cocoon..."

And yet here we are now, stuffed in tight, the four of us, into this space...and now it feels like Ben has crossed over to really feeling like one of Us...similar humor, strong in his opinions, blunt in his thoughts, curious about everything.
Welcome to the team, Ben.
Posted by Liz Aguerre at 2:08 PM 2 comments:

My mom believes in the "evil eye."

That's what they call it in spanish. The old Cuban way of thinking is that if  you have good stuff in your life, then people will wish you ill. They will be jealous. They tell me this--my family--over and over again. Even young, professional, educated, modern, Cuban parents fall into this superstition: everywhere in Miami, you see cute fat babies with little black beads hanging from their necklaces--azabaches--to ward off the infamous evil eye.

I never believed in it.

When I had my kids, I refused to put one of these little black stones on them. I lectured my parents on karma. I told them that if someone wished my delicious, perfect little boy ill, then that person would surely get it back from the Universe. They, in turn, tried to tell me that most of the time, when you got this evil eye, it wasn't purposeful; it was actually accidental: people were just admiring your child, your choices, your life.

How could this be? I scoffed. You're trying to tell me that someone who is happy for me has accidentally given me bad luck? Nonsense.

Then again, I am the person who knocks on wood--literally--every single time I say something about how great things are. I mean, I actually wander around, mid-sentence, looking for wood, or something that resembles it, to knock on if I say something like "Everything is good. Everyone is good." It's like, I don't want to throw it out there...to the universe...that all is good...I feel like just maybe, I might jinx myself.

Isn't that almost the same thing as my mom with her evil eye and black beads?

For the last 17 days, at least one of the people in my household has been sick. Not sick-sick (I just knocked on the plywood computer desk), but sick as in strep throat, high fevers, overall misery. Poor Ben had it for a whopping 15 days. Aidan for a mere 2 (we cheated and broke every rule and gave him Ben's antibiotic the minute he started with the symptoms). And now, Hubby.

We postponed a major road trip with the 4 grandparents and 2 kids (yes, FOUR grandparents and TWO kids--sick ones, at that-- in one RV) and then went anyways and then had to come back one day early in a huff and a rush with a little one puking and suffering with 104. (Truth is I think the grandparents suffered more just watching and worrying and wishing I would have just put one teeny tiny little black bead on the kid...).

Now I postponed an annual girls' getaway because of Hubby.

I was told by my good wise old friend: "You know you're next."

I can't take one more thermometer, one more dose of nasty-smelling antibiotic, one more cold washcloth on a steaming forehead. 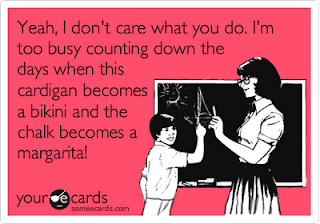