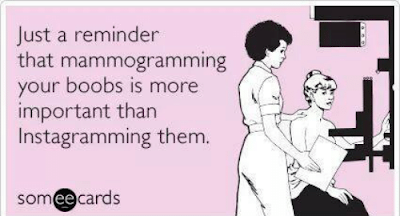 Ten years ago this month, my sister was diagnosed with breast cancer.
We had no family history. She did not have a lump. And they only found it because she is ridiculously, brilliantly diligent: she never skips an annual exam of anything, and when they told her she should have annual mammograms and ultrasounds "just to be safe" due to the density of her breasts, she did so. The mammogram didn't catch it, but the ultrasound did. It was small and stage 1. The type of cancer she had was the most aggressive kind, and it is very possible that if she had skipped a year...because ya' know, we don't really have that in our family...she may not be around right now.
Yes. Happy ending.
She's happy and healthy and all is well.
I won't say she "beat" cancer, because I've always felt that to say that about those who survived is to imply that those who didn't, didn't fight hard enough. Cancer is a bitch. And sometimes, no matter what you do or what you believe or how much of a great attitude you have, cancer wins.
So, yes, we are some of the lucky ones.
That's not to say she didn't fight. She fought like a bad ass. She not only listened to her doctors' recommendations, she challenged them, went beyond them, did what was right for her, and did it all with a sense of humor. (After each of her multiple surgeries, she would swing her drains around like a pin up girl with a feather boa and drawl: "Look, Lizy, aren't I sexy?").
At the time, I don't think I processed it all too much. Some of it might have been self-preservation (read: denial). Some of it might have been that I was in the throes of raising two little boys. I look back and often wonder: "Good God, how did we all make it through that? How did she make it through all that?" We all know--or can imagine--how hard the war with cancer is, but the details...the everyday, the private horrors...It is amazing how we, as humans, can put our "big girl pants" on and do what's gotta be done.
My sister has some physical scars from her duel with the big C, but I'm pretty sure all of us have some emotional ones. She says her cancer changed her life. She's proud and relieved to say that she's "one of those" who feels she is better off because of it. I suspect we all are. I don't think any of us take much for granted (most days), but every May when I walk into that dark room in my paper robe, I have to remind myself to breathe. I never, ever miss my annual appointment. I don't even allow it to run "a little late." I feel like that's one small way I can pay homage to my beautiful, brave sister.
So, ladies. Don't miss that appointment. Don't skip it. Don't put it off. Because you're probably fine. But you owe it to yourself and all those who have fought the fight to put on that damn paper gown, walk into that room, and breathe.
***********************************************************************************
In honor of breast cancer awareness month and my sister, here are a couple of posts I wrote back then.
My Sister Has Breast Cancer (or Time to Put on Your Big Girl Pants)- I wrote this one while sitting in the waiting room when she was having her double mastectomy on November 3, 2012
My Sister HAD Breast Cancer (or: Time to Pop Open the Sangria) - I wrote this one after celebrating her last clean scan on February 3, 2016.
Posted by Liz Aguerre at 8:47 AM No comments: