My sister HAD breast cancer (Or: Time to pop open the sangria) 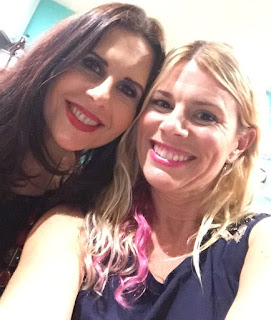 This one has a happy ending.

Usually, I don't like to know what happens at the end. No spoilers. But this story...this one I prefer starting with the ending.

I hate those terms, even as I write them: battled, won.

What does that mean? That the people who didn't end up with clean pet scans three years later didn't battle? Didn't fight? If she, God forbid, had not made it, would I have said she had lost?

The truth is, I suspect, that she was lucky. Or that it wasn't her time. Or it wasn't meant to be.

Whatever it was, whichever cancer cliches I choose to use to describe it all...the ending is a happy one.

On November 3, 2012, my sister had an elective double mastectomy. I sat in the waiting room, cross legged in a scratchy chair, trying to shut out my parents' terror and my brother-in-law's fear by writing about my own. I haven't reread that post, ever. I plan to when I'm done with this one, but I will force myself to wait until I hit the "publish" button here before I go there. I want this post to be a clean purge, one based on what I am feeling and thinking now, and what I have thought the last few days, and what I have learned from her cancer; not a post that is reminiscent and dramatic because of that one.

Today, my sister received the news that her full body pet scan--the one her oncologist said would serve as her "closure"--was clean. Three years after a diagnosis, what seemed like a million surgeries and complications, a bald head, plenty of follow-up blood tests with good news...the final test. Her closure. Supposedly, she is now just like one of us: her statistics are pretty much almost the same as mine. Maybe yours. Maybe the guy in the cubicle next to her. She is...what? Cured? Done? A survivor? Regular? I'm not sure what to label it, exactly, but I like when an oncologist tells my sister this is her closure. I like when they use a machine so powerful it can look right into her body and find any chance of cancer, and then tell her: Nope. You're good.

Her cancer changed her. That is for sure. But it changed all of us, I think. I know it changed me. It was like I had that post war shock thing: it vibrates inside of me harder now than it did then. Back then, I was all head-down-get-through-it-taking-care-of-business-matter-of-fact. But later, it was like I lifted my head and looked around, confused, dizzy, shaky, like: Holy fuck, what the fuck was that? My sister had fucking cancer. My sister had fucking chemo. My sister could have fucking died.

The reality of it: that cancer had actually touched one of us...not like a story about someone at work, or a parent of a friend, or a third cousin, or my 80-year-old grandfather. No, this was real. This was my healthy, loud, always-looked-younger-than-her-age, not-even-fifty-years-old sister. This was one of Us.

It made illness, frailty, mortality all real.

But this...This...this just made me see that way of thinking as a Necessity more than a Philosophy.

And even the way I see my sister has changed. When the shit truly hit the fan, she did what she had to do. When she had drains sticking out of her body for days, she'd call them her "balls" and swing them around and make jokes. When she admitted that losing her hair scared her more than anything else, she shaved it off. When she was done with the physical fight, she turned inward and made her Self truly happier. When she was told it was better to stop thinking about it, she got herself trained as a volunteer to help other women going through it. She has been brave and real during all of it.

When she was waiting for these results, I really truly believed they were going to be okay. Something inside of me told me she was done with this. She had come out of it on the other side.  Today, this chapter of her life is closed, as far as I'm concerned. She deserved her happy ending.

**Follow-up: So yeah, I went back. I read the post. And now? Well, let's just say I'm gonna drink a lot of fucking sangria on Sunday with my sister.
Posted by Liz Aguerre at 10:06 PM 2 comments: