Our first few stops during our month-long road trip were short but sweet. I sorta felt like they were little appetizers. Hubby and I always find that when we travel, it takes us a couple of days to settle in a bit. This is especially the case when we travel long distances in the RV...we hate to admit it, but even my husband, the optimist, frets that something will go wrong/break down/derail our plans. (We did have some little glitches, but more on that later.) So the first few stops were actually really good, not only because we enjoyed them and they made the trip to our first major stop much easier, but because they helped us work out some kinks--both actual and imagined.

Stop 1 was Melbourne, Florida, 3 hours north of home, and a very familiar place for us: Tantala's house (Tantala is yiddish for aunt, and it's what the boys call our dearest friend, Beth). We couldn't drive by without stopping to spend some time with her. We were rookies in teaching and in life when she transferred to our school. Everyone instantly fell in love with her, but the three of us formed a very special friendship and we can not imagine our lives without her. The boys have grown up alongside her grandchildren and while they play and act goofy and refer to themselves as "sorta like cousins," the three of us sit in her living room and talk for hours. 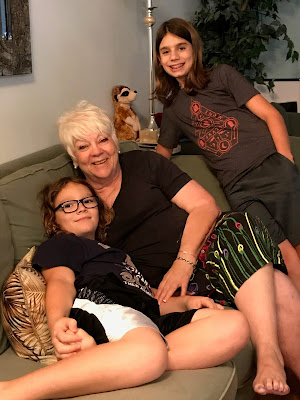 Stop 2 was St. Augustine, Florida, where we have visited a couple of times before, but Aidan Kai was too little to remember it, and Ben wanted to go back after learning about it in school. We walked around the town, shopped, and visited the Castillo de San Marcos. 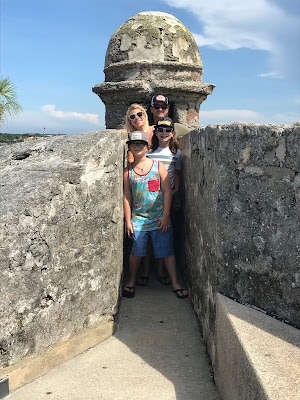 Our campground was on the beach, and after a full day of exploring, we went for a late afternoon walk on the beach. The boardwalk seemed to stretch on forever, and as we were walking, I managed to capture this moment:

Stop 3 was the bizarre South of the Border, SC.  We needed a place to stop and rest during the 16 hour drive it would take to get us from St. Augustine to Cedar Island, NC, so we decided to stop at this iconic spot. For over 50 years it's been there, in the middle of nowhere, between North and South Carolina. It was labeled on Yelp and Tripadvisor as an "amusement park." Yeah. Uh. No. I had never been, and although I had heard about it, read about it, and saw pictures online, nothing could prepare me for the cheesiness and weirdness of the place. It consisted of random, giant statues of chickens, hippos, whales, and donkeys (just to name a few) strewn across a giant compound with an indoor pool (I called it the cesspool, but the official name was--I kid you not--The Pleasure Dome), a motel that looked straight out of a 1980's horror film, gift shops that contained just about anything you could imagine, and sad looking employees sweeping the parking lots.

Anyone who travels regularly in an RV knows that things are bound to go wrong. One just hopes they are minor issues, not the kind that leave you stranded on the side of the road for 14 hours.  The generator was acting up, and because there is ABSOLUTELY NO WAY POSSIBLE the 4 of us could survive in the summer inside this much beloved tin can for several hours at a time, we wanted to err on the side of caution, and made a stop at Camping World to get it checked out. (They couldn't find anything wrong with it, but a mobile mechanic came out later when we were in OBX and took care of it, so thankfully, we are traveling with full AC and video games for those 8-hour-drives.)

Along the way, I took over the driving for a couple of hours, mostly to get over my new fear of doing so. Although never a fan of driving a 32-foot-long mobile home, I was never really scared of it. After our accident in December, and ever since pulling my pick up truck behind it, I became almost paralyzed with the fear. So we picked some calmer roads and highways and after a little while of white-knuckling it, I managed to do all right. 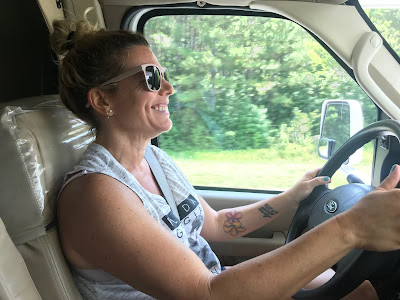 More mini adventures along the way:  Neither of our driving apps warned us about the road closure we encountered on our way to Cedar Island. (Although one local old guy did stop to point out repeatedly that there were six signs along the way doing just that. "Six signs! Six! If I had a dollar for every one who didn't see those and had to make a u-turn...Six!"). When one is driving a thing that long with a truck attached, let's just say that u-turns are just not an option. Neither is backing up. So. We did a little off-roading. It was interesting. It was fun. Only because I was not behind the wheel at the time. 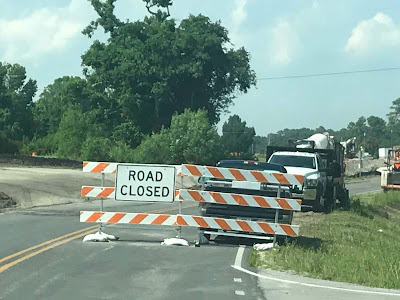 Stop 4 was Cedar Island, NC, a beautiful and isolated (and unbearably, oppressively hot) campground just outside the Outer Banks ferry we would be taking first thing the next morning. 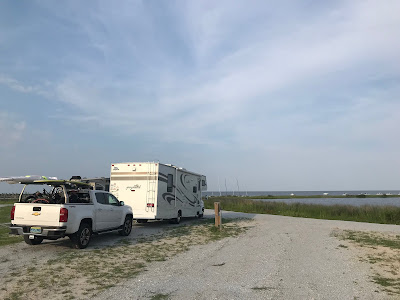 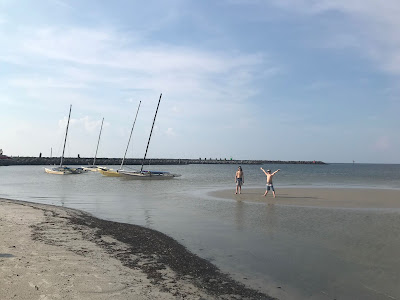 Next stop: Hatteras, NC in the Outer Banks, one of my very favorite places!

Posted by Liz Aguerre at 3:55 PM No comments:

On the Road Again: The (Temporary) Return of the Travel Blog

It has been one year since I've contributed to this little space of mine, and three years since the four of us have all piled into our RV for a looooong road trip.

For the next month, we will be on the road in "Honu," our 32 foot Class C motorhome traveling around to both new and familiar places in the Southeast U.S.

This is actually shorter than our last summer trip, which took us (almost) to Canada (it was too damn cold for this beach bum) and took up about 6 weeks of our summer. So yeah, a month doesn't really scare us.

Last time it was a 6-year-old and a 9-year-old we were dragging around and sharing about 250 square feet of living space with, not a practically-13-year-old and a now-suddenly-getting-opinionated-nearly-10-year-old. For people who do not have kids (stop gloating), that may not seem like much of an age difference. For those who have entered, are enduring, or have survived the teen years, you know this can be a potentially volatile situation.

Hubby and I are (perhaps naively) optimistic. In fact, we couldn't wait to get back in the RV and escape it all with them. You see, the amazing thing for us is that when we do go camping together (I use the term "camping" loosely here, since, hello, I have a mini apartment on wheels here), everything else seems to fall away. The essence of who we all are, as individuals and as a family, seems to really come back to the surface. This is our hope for this trip: that we stop bickering (mostly) about nonsense like video game time or who sits where on the couch...that we will, once again, build memories that will make them want to continue spending time with us, even as they grow older...that they will meet new people and see new places and try new things and just sit and breathe and play and laugh and love.

We have made a lot of changes in our lives over the last few years so that we can attempt to live in a perpetual state of vacation. We take mini trips every other month, if not more often. We go to the beach on weekdays. We make time to play as often as possible. But these trips, the "big ones", these are really what it's about for us. So here's hoping that this one, like all the others, fills up our souls and brings us even closer together.

Here's the itinerary:
Stop 1: Melbourne, Fl...Visiting "Tantala" AKA our dearest friend and the boys' pseudo Grandmother
Stop 2: St. Augustine, Fl....After studying Florida history, Ben requested we return to check it out again
Stop 3: South of the Border, North & South Carolina state line...this stop is mostly for practical purposes, but I'm thinking we may get a little Griswald-y here
Stop 4: Cedar Island, NC..just an overnight sleep stop
Stop 5: Outer Banks, NC...AKA My Second Favorite Place Ever
Stop 6: Cherokee, Smoky Mountains, NC...hoping to get over my fear of white water rafting here as well as enjoy some tubing, aerial park adventures, visit Asheville, do some hikes
Stop 7: Nashville, TN...spending a little downtime between the mountains and our next long drive during July 4th week at truly country-themed campground
Stop 8: Pitstop in Lynchburg, TN to check out the Jack Daniels Distillery (if you know us, no explanation is necessary here)
Stop 9: Florida Caverns State Park, Fl...went here on our very first RV summer trip (back when we thought being gone for 9 days was an adventure), and the boys barely remember it
Stop 10: Henderson Beach, Destin, Fl...this was my first beach campground experience and became the measuring stick for all future beach camping trips

Old posts from the road:
Lessons Learned in an RV

"Life is either a daring adventure or nothing at all."
~Helen Keller