Why They Should Sell Booze at The Magic Kingdom - Throwback Thursday 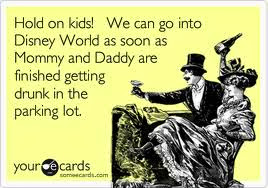 If you live in Florida, there exists a sort of Golden Ticket, if you will, known as The Disney Annual Pass. We get little perks and privileges for living so close and The Powers That Be over at Disney know that if they promise a little discount here and a little payment plan there, we will be suckers enough to think it's such a bargain that we must repeatedly count our lucky stars, load up the car, and drive a few hours over to this magical place as often as humanly possible. Really, we get ourselves to the point where it almost feels like we are "just running over to Disney for a few incredibly discounted hours of fun!"

And over at our house, I fully admit, we are suckers. Big time.

And it's not just for the kids, either. My husband and I love it just as much. It's quite amusing, in fact, to hear my testosterone-laden, scruffy and tattooed-up, long-haired man talk about how excited he is when counting down the days to the next long weekend.

So after a few years off, we are finally, once again, the proud Golden Ticket Holders of an Annual Pass. Which means we will be going to Disney. A lot. Which reminded me of...

Why They Should Sell Booze at the Magic Kingdom
originally posted here on October 29, 2013

I was startled (we all were, really) by a woman's shrill reprimand: "You put your mouth on it! Don't tell me you didn't put your mouth on it! You did!" I turned (as did everyone else, really) to see a mother disdainfully holding a red frozen fruit bar and looking accusingly at a pre-teen-ish age girl. I didn't really understand why she was so mad, so I kept watching in hopes I'd figure it out: was the kid sick and therefore banned from sharing any of the rest of the family's popsicle snacks? Was this mother one of those germaphobes who did not like sharing food with her own children? I must not have been the only bystander trying to figure out what had caused the woman's reaction, because she looked up suddenly and noticed that everyone (and I do mean everyone) around her was staring, and she apologized (almost as loudly) a half-ass apology: "Sorry. Sorry, everyone. Sorry." As she and her apparently sneaky, popsicle-licking daughter resumed walking passed us, another woman who I assumed was the aunt came over and put her arm around the kid. The mother (now no longer shrilly shrieking, at least) silently lifted the arm off her daughter's shoulders, and spat out: "Why don't you go up there and walk with your Uncle Timmy?" To this, a man one could only assume was Uncle Timmy, turned around and came over to his niece, throwing an arm around the kid's neck and loudly proclaiming: "C'mon, kid, this is the happiest place on earth! Let's go be happy!" and he skipped away with her, chuckling.The next morning, I was ripping sugar packets open and dumping way too many into my coffee, when I noticed (how could I not?) a toddler wearing "Jake and the Neverland Pirates" pajamas having a complete and total meltdown while his mother was trying to pull him up to standing. The kid was doing that thing toddlers do: letting his bones go all Jell-O, his face scrunched up, his eyes shut tight, wailing (even louder than the mom in paragraph one, above) incoherently. I stirred my coffee and watched as the mom attempted to shut him up and pull him up to standing. When neither of these two were accomplished, she let him go (I suspect if she could have bounced him painfully onto the ground like a basketball, she would have), tossed her arms up in the air, and stepped back over to the register a couple feet away where she had been trying to pay for her $10 Mickey-shaped waffle. The kid remained writhing and wriggling and wailing on the food court's shiny tile floor, while other guests walked around him with their coffee cups and breakfast trays. I didn't stick around long enough to see how the mother managed to drag him and her breakfast tray back over to wherever, but I did silently hope that she was washing that cute little pajama in hot water before putting it back on the kid for bed.Then there was the dad who, in the middle of a crowded area, grabbed his son's face as if his fingers were tweezers and the kid's face was a nasty embedded splinter. He nearly put his forehead right up to his kid's, and shouted in one of those gruff, manly, camo-wearing type voices: "Get. Outta. My. Face. I've. Had. E. Nuff."Those are some of the scenes I witnessed this weekend at Walt Disney World.And, as a parent, I totally get it. I'm not saying that I approve of any of these parental reactions.I'm not saying that I would have done or said the same things with the same level of ferocity and impatience.All I'm saying is that I might have.There really, truly is something magical about Disney. I've said it before. As someone who has grown up four hours away, I'm one of those people who has been so many times, she's lost count. I realize that to some, this is cause for great envy, while for others, this is cause for great, wrinkly-nosed disdain. But I love Disney. I love everything about it (except the summertime and the long lines). I love the way they pay attention to every detail, how even the soaps in the hotel and the signs in the public restrooms have Mickey shapes. I love how they are constantly trying to outdo themselves. I love how everyone who works there is required to smile and be cheerful and somehow, they never seem to be faking it. I love the looks on my kids' faces when the fireworks display begins and Tinkerbell "flies" along the night sky out of Cinderella's castle window and off into wherever that nearly invisible zipline ends. I love the Caribbean pirates chanting their "Yo-ho, yo-ho, a pirate's life for me." I love the giggles a photo op with Winnie the Pooh and Goofy elicit from my little boys. And I love, love, love the fully-grown adults who happily and casually walk around wearing Mouse ears and coordinated t-shirts. Disney, you see, is full of whimsy.And I love me some whimsy.But those of us who have been there with small (and even not-so-small) children know that just like Disney World can bring out the best in parents, it can inevitably bring out the worst.We were lucky on this trip: the boys behaved--for the most part--beautifully. But there was no way we were going to walk around passing any kind of judgment on the parents described above. Cause God knows (or, in this case, should I say 'Walt knows'?) that we are always just one tantrum away from being the crazy parents screaming shrilly about a popsicle while crushing our kid's face for dramatic emphasis.
Posted by Liz Aguerre at 3:30 PM No comments: