Look who's on Mamapedia today!

Needless to say, I'm quite happy about it.

It's funny: when I wrote that post, my only intention was to get my feelings down on paper. I was sitting in my backyard, listening to music, watching my boys playing in the pool, and wanted to capture the simple bliss I was feeling at that moment...the feeling of gratitude and contentment. It was one of those experiences I have sometimes where I just put pen to paper and go. The words sorta come out of me without any effort or self censorship. I was happy when I finished it, and here's the thing: I almost didn't post it on the blog. I was worried it would seem boastful or pointless. And then I had to remind myself that my blog is, first and foremost, for myself. A couple of days later, I was contacted my Mamapedia. It was another reminder that I shouldn't second guess myself and my words so much.

So yeah, no big deal...just go on over to Mamapedia...'cause I'm right there...ya know....where it says "Mamapedia National Voices" and "Mamapedia Miami Voices". 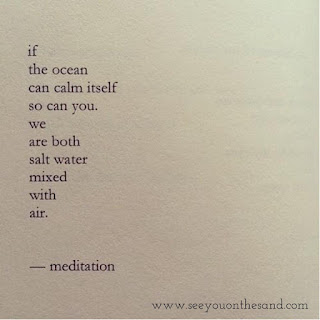 I get frantic. It's what I do. I think, unfortunately, it's just how I am.

I get all jittery inside: like a pinball machine. Or, better: one of those bouncy balls my kids get out of coin machines. You know the kind...a tiny, rainbow-patterned swirl of rubber boing!-ing around all over the place. Your kid bounces it "just once," and then it's gone...each time it hits a surface--the wall, a kitchen counter, the TV table--it seems to gain more speed...and pretty soon it's going in so many different directions, you can't keep up with it. Until, someone finally wrangles it into containment. That is usually one of my little boys, pouncing on it, throwing his whole body onto that little extra-bouncy bouncing ball, as he giggles so loudly and uncontrollably that it makes the "It's-going-to-break-something!"-situation worthwhile.

Yep, that's me. The bouncy ball.

I'm working on the containment part.

Good. Bad. It doesn't matter. I get like this as much (possibly more) with Good Stuff, as I do with Bad. But the Good Stuff...it can be minor, silly, stupid stuff that really...really...does not need all this frantic, frenetic, bouncing energy.

C'mon. I mean, these are all really awesome things. But I suspect that maybe, just maybe, I would enjoy them even more if I calmed down a bit.

And it's not like a logical thing. It's not like "Oh, I'm frantic inside because I forgot and did not get the tickets for the show." or "Oh, I'm only this frantic because there is a traffic jam and I may not make it to see my 4-year-old looking incredibly cute as he wears a teeny tiny cap and gown and walks down the aisle to the graduation march."

'Cause, really, then maybe it would make more sense. Like, I could actually explain why I'm all jittery inside. Then my friends and my husband may not think I was totally crazy. (Truth is, I don't care too much about that, but I do know that I am, in fact, a bit crazy, and it does, actually, drive me totally crazy.)

No, it's not logical. Sometimes, I don't even realize I'm all bouncy inside. And then, when I do--because I notice my face feels hot, or because my heart is racing, or I'm talking waaaaay too fast--I pause and ask myself "Why?" I check in to see what it is, exactly, that I have missed or forgotten to do or is still pending that has put me into this State Of Emergency Feeling.

And, the answer?
Usually?
Nothing.
Not.
A.
Thing.

At least I'm checking in on the bouncy ball frantic feeling, right? At least I'm asking myself what's going on? At least I'm catching myself and becoming aware and noticing the ball boing!-ing all over the place on my mental surfaces?

I'm working on it.

I had not been too successful in the past. I would either dismiss any accusations of unnecessary crazy, or defensively claim "That's just how I am!" (and secretly wonder, "Why aren't you like that too?").

Really?  I really said/thought/believed that? Really?

(Disclaimer: And sometimes, I still do.) But mostly, I have realized that more important than actually being able to "help it," is wanting to.

I want to help it.
I want to calm myself down.
I don't want to be in a nearly perpetual state of emergency and claim that it's my intensity or my passion or my writer's head.
I have realized that, for me, at least, there is no glamour or glory in this.

But who the hell wants to live like that?

Not me.
Not anymore.

I'm so much more into mellow, now.

(Another disclaimer: I'm not saying I am mellow--at least not most of the time--but I do like mellow.)

I have come to realize that I can enjoy Good Stuff just as much and get through Bad Stuff even better if I am mellow. Calm. Present.

So I attempt to contain the bouncy balls these days.

I am not always successful. I have realized, too, that this really is "just how I am," but there is no judgment or beating myself up for being frantic. And although there are more times now than ever before that I can, in fact, pounce on it, throw my whole body onto that little extra-bouncy bouncing ball and stop it, there are also those times when the ball keeps going...gaining speed as it hits that damn kitchen counter or that living room wall.

But it's okay. because like my little boys, I will keep chasing after it as it keeps boing!-ing around, and I'll make sure to remind myself to giggle loudly and uncontrollably along the way, so that it's all worthwhile.

Labels: me, stress, surrender, type A 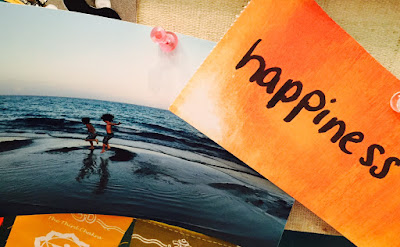 This may be the happiest I've ever been.

I feel like I've finally settled into myself...into the Life I Was Meant To Have.

I can stop--probably for the first time ever--truly stop and collect myself. Stop the noise in my head, when I need to.  Stop the frantic-ness that can be Me.

I have created this day-to-day life where I am outside a lot. In a bathing suit. Barefoot.

My boys are almost always sun-kissed--their long manes lightening with the sun. Vitamin D, this family is certainly not lacking.

I listen to country music now--a lot. I find it soothing and it makes me smile.

My back patio double doors are often open.

I do yoga and I meditate on pavers warmed by Saturday morning sun, overlooking the turquoise water of a pool that is quite worn--everything but fancy.

We know our RV is always sitting in the yard--an escape, freedom--available any time.

I have good, good people in my life.  A full house on New Year's Eve (after thinking "no one is coming...we are living too far East now") with family and friends and kids, dancing The Wobble in hysterics, singing every Florida Georgia Line chorus, dancing merengue to the songs of my childhood.

I am happy in my own skin--in spite of its weathered, far-from-young-and-smooth surface.

I am married to a man who, even after nearly 15 years, I can't believe I was actually lucky enough to find and coerce into attempting to put up with me.

I live in a cozy little house--with walls the color of that pool water and shelves made from driftwood we found on beaches and collected through the years.

Yes, I've been lucky. But I've made choices. I've taken chances. I've trusted. I've dared.
And this--this is the happiest I've ever been.
Posted by Liz Aguerre at 7:22 PM 2 comments: