My babies are in high school...together 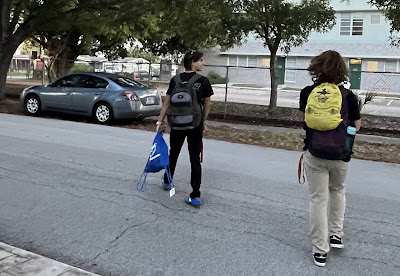 Today my babies went to high school together. The same babies for whom I started this blog. The same babies I thought would never grow up and let me sleep in late on a weekend or take a shower in peace. I started this blog to survive the early years of motherhood...a time I found awe-inspiring, disorienting, overwhelming, and exhausting. Now, here I am: standing in my driveway, waving, taking pictures, watching them walk together to Ben's car, put their backpacks in the trunk almost in unison, get in the car, and drive off.

For the last 12 years, we always had one or both of our boys with us at our school where we teach. We drove the 40-minute commute in different combinations: somedays all four of us; other days split into pairs (those mornings when we knew the boys sitting in the back seat together for that long was going to be a really bad idea); and yet other days split into a ratio of 1 to 3 ("You take them today because I have them in the afternoon and I really need some quiet time this morning.").

For the last 12 years, they were always around...hanging out in our classrooms in the mornings or afternoons, being excused from class to see us because they needed something for a headache, or a form they'd forgotten to get signed, a snack, or just because they were running an errand for their teacher and stopped by on the way to say "hi." And my husband's and my favorite moments: those spontaneous, unexpected sightings in the hallways which would usually result in a high five, a passing joke, or (especially these last couple of years with our "gentle giant") a body-jarring hug.

We overhead them talking about it last night:

"Don't worry, Kai. We'll get there early and I'll walk you around to all of your classes so you'll know where to go. And maybe I can even meet you in between some of the classes."

"Ok, thanks, Ben. And oh, can we use our phones in class, or is it like elementary and middle school?"

"Then can I text you during the day?" 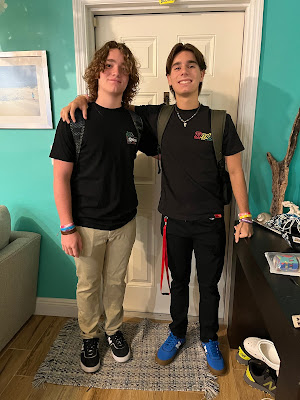 We were ready, as parents, for this new chapter. We were ready to be, for the first time, just Mom and Dad, and not Mr. and Mrs. A...to be able to let go after having them with us from kindergarten to 8th grade...to know they will be in situations--academically and socially--that we not only will know very little about, but will also not be able to step in and intercede. We have no "pull" now.

Knowing Aidan Kai, who has always been a little shyer, a little less daring socially, will have his big brother there to guide him gives us peace of mind. And to know Ben actually wants Kai there...that gives us a satisfaction we cannot express. We spent their whole lives trying to get them to bond, to rely on each other, to be kinder to each other than to anyone. Years spent camping and traveling and playing and talking...we think they are paying off now.

Towards the end of last school year, Ben told me: "You know, I'm excited about Kai coming to school with me next year. I think it's going to be fun to have him there, to be at the same school again."

Today when I got home from work, before I wrote this post, I went back to my first-ever blog post about the boys. It made my heart ache a little for those babies, but it also made my heart swell with pride and joy and excitement watching who they are growing up to be as individuals, but also, as brothers.

Here they are...the source of much of my joy and frustrations: The Boys. 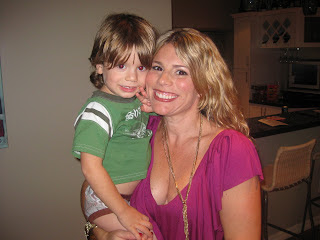 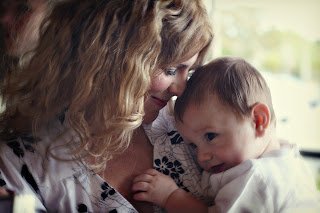 Ben's 3 1/2. He's a rock star, for sure. And not only in his parents' very biased minds. Everyone who knows him thinks he's a rock star. So does he. Fortunately, on most days, we totally lucked out with this one. He really is everything you'd want your kid to be: funny, smart, athletic, and (almost always) sweet. But we are well aware that we need to keep a tight leash on this one. He's scary bright. He also inherited some of his parents' "best" qualities: stubborn and opinionated. His favorite sayings? "Watch me," "Try to catch me!" and "I know that."

Then along came Aidan Kai. The name "Aidan" means "fire." The name "Kai" means "ocean" in Hawaiian. So there you go...a walking contradiction. He's only been around for 7 months, but he's already given us our share of contradictory feelings as well: "Isn't he the cutest thing EVER?" and "Why the heck did we want another one, again?" He spent the first 4 1/2 months of his life wailing, shrieking, crying, and making everyone around him state the obvious: "But Ben was never like this!" And although he now spends most of his time flashing his dimples, he's still known as our "High Maintenance Boy." I feel strangely protective of Aidan Kai. Perhaps it's all the sibling comparisons from everyone, perhaps it's the dimples, perhaps it's the High Maintenance label that has been permanently affixed to him, but I can just relate to him. I can't wait to see what kind of kid he's gonna be.

Posted by Liz Aguerre at 7:21 PM No comments: