A case for disconnecting

My husband rarely checks his phone. He is harassed often by his friends, his mother, and occasionally his wife about how long it takes to get a hold of him. Those of us who know him well know that it is not personal or purposeful. And those who know us well, know that if you need to get a hold of him right away, text or call me. Because my husband is rarely looking at his phone, while I, on the other hand, have been slowly becoming that person who rarely does not.

Back in 2009 when I first started this blog, I wrote a post bashing Facebook (and pretty much mocking the people who use it constantly). Now, I refer to FB as my rabbit hole: I open it up to post something or peruse, and I fall in...

If my phone is on the kitchen counter and I walk past it, I will pick it up and check it even if it hasn't rung or beeped or vibrated or dinged, "just in case."

I used to get really, really, really pissed at my friends who had their phones out during dinners or when they came over to visit. Once (possibly more than once), I snatched it away from my girlfriend, hissing about how insulting it was...was my company not enough? Last month, I went away for my annual girls' getaway, and this time it was one of my girls hissing at me (albeit more gently, because, well, let's be honest, I have a reputation for being harsh): "Put. That. Away."

So a couple of weeks ago, when Hubby and I went to Disney World with the kids for four days, I declared a moratorium on all things connected. No Facebook. No texting. No "just checking" either. (Okay, disclaimer: I did post ONE picture on Facebook, but it was with Hubby's blessing and it was too good to pass up...Here it is:)
I admit that there were a few moments I wanted to capture and text immediately to a friend with a clever comment, and there were more than a  few times I wanted to post something for the world to see, but for the most part, it was easy. There was something incredibly freeing about clicking off my phone and dropping it in the backpack...never fumbling around and checking my pockets frantically to find it...never missing a moment or a conversation because I was reading a text message. I remember the trip much more clearly, because I was actually present for all of it; I wasn't multitasking or trying to maintain ten conversation threads at once.

And I know what would have happened had I not made that promise to myself and my family at the beginning of the trip: I would have had my phone out in every line, while walking from ride to ride, while sitting on the resort bus.... And I would have been able to rationalize it by saying that I was "only doing it" when nothing else was going on. As a result, I would have missed out on all the conversations and all the comfortable silences, the spontaneous jokes and hugs, the parenting and family time, the snuggling up against my Hubby's shoulder in exhaustion while waiting in line, the great people watching that can only be seen in a place where that many people from that many places congregate.

Something else would have happened too: I've realized I get overstimulated. You know, like when you're a new mom and you're reading the baby books, and they tell you that for some babies, too much stimulation can make them overwhelmed and cranky and unbearable. Well, over the last few months, I've been working a great deal on all that "noise" I talk (and write) about that's always in my head, making me exhausted and stressed out all the time. I've realized that a lot of that comes from the external stimulation I inflict upon myself: not only the phone and the computer, but also the attempts at multitasking, the endless To-Do lists, the self-imposed demands and unrealistic expectations to keep up with it all. So I would have been just one more cranky, annoying, crying baby waiting in line for the Dumbo ride.

I came back from that trip pretty oblivious to what was going on in my social media groups and the blogs I follow. I felt disconnected enough that I neglected (purposefully and consciously) this space for a while, too. I didn't sit on the couch with the laptop open. If I absolutely needed to look something up, I used my phone so I wouldn't linger too long. When I posted something on FB, I tried to resist my Alice in Wonderland incarnation. On Christmas Day, I avoided the internet completely. Although I have to admit that some stress has come from all this (What if my followers stop reading my blog? What if I lose my niche in the little author groups I've joined? What if someone is waiting on me for a response to something?), for the most part, it's been calming. I have had more time to talk to my children. I have had more time to interact with my husband. When I've been with friends, I've been fully present. It's the same old thing we keep reading about and discussing out there regarding the society we live in and all its hyper connectedness: as amazing as it all is, to a great degree, we are missing out on the people who stand before us and the experiences we are literally having in an attempt to post, text, and "connect."
Posted by Liz Aguerre at 1:07 PM 1 comment:

All I Want For Christmas...is to stop 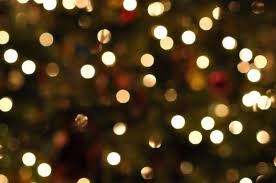 My birthday is next week. Christmas: a mere 14 days away.
And all I want most is to slow down a little bit.
Enjoy myself.
Stop with the to-do lists and pending items and general busy-ness.
The tree has been up for nearly 2 weeks now, and I have barely enjoyed it.
I have forced myself to listen to Christmas music twice.
The second time, I turned it off in a huff because it was just adding noise in my already-noisy house and I couldn't hear the shouts of: "Mommyyyyy....how do you spell 'Grandmaaaaa'?"  "Mommmmmmyyy...how do you spell 'been'?l"
I don't even do that much: my kids are not currently in sports. There are few afterschool activities. I have a small social circle, and thank God, no more medical obligations with family members.
I don't do that much.
I just do Life.
Life with 2 small boys.
Life as a teacher whose job feels more stressful and less pure everyday.
Life as a wife of a husband who I barely spend Quality Time with Monday-Friday, in spite of the fact that we work together.
Life as a woman who likes things "just so" and puts an awful lot of demands on herself on how things "should be."
I can't seem to keep up with the crumpled up list of pending Christmas Responsibilities that's mocking me from the bottom of my ridiculously messy purse.
How come all the Christmas commercials on TV are about hot chocolate and carols and family members in ivory sweaters sitting around the tree, lights flickering, laughing? Does anyone really live like that during the month of December?
And then of course, there is the self-inflicted pressure (I can probably search that phrase--self-inflicted pressure--on this blog and find it...repeatedly) of knowing that Christmas is coming...it's practically here!...and I have not enjoyed it. And that, perhaps, is at the heart of the problem: I want to enjoy it...like I did when I was a little kid, in my parents' house, an entire month of doing little else but anticipate and revel.
So for Christmas (and my birthday) all I want is to slow down. Take a few breaths. Sit. Laugh with my husband and my boys. Take it all in. Do nothing.
Posted by Liz Aguerre at 10:11 PM 2 comments:

That's my name...in a REAL book! Launch Day for The HerStories Project Anthology 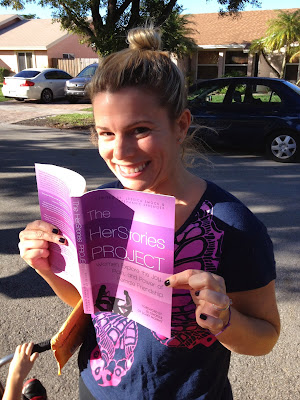 The four of us were stalking the UPS truck. I was totally trying to pretend it wasn't such a big deal.
But then my oldest turned the corner on his bike and yelled, "Mommy! Look!" and my youngest followed him on his drifter and announced, "It's the brown truck with the golden stripes!"
The book arrived and I opened it up and turned to page 17, and I couldn't pretend anymore.
This was a very big deal.
I was giddy.
High.
There was my essay: "The More The Merrier."
There was my full name: Elizabeth Suarez Aguerre.
A real byline.
Perhaps I was a bit biased, but I thought the book was beautiful: pink and purple, the exact shades of my teenage bedroom. The cover was simple, but appealing. Just heavy enough in my hands.
A real book.
I have been published before (nine times to be exact!). You'd think that would be more than enough. But although I am extremely proud of those projects, they do not hold my true voice. This book is the real writing Me. It is the style and genre of writing that I have dreamed about being published in for as long as I can remember.
My essay sits there, sharing space with 49 other amazing women writers, and I am honored. These amazing editors, Stephanie Sprenger and Jessica Smock, found my words, my piece, and thought it was good enough to be in this anthology on women's friendships. Thank you.
After showing the book to my boys ("Look, that's Mommy's name!"), Hubby and I toasted with a bottle of champagne. I carried it around the rest of the afternoon, under my arm, crystal flute in hand. After this experience, after feeling this feeling, I can no longer deny that I. Want. This.
This byline...this book...this opportunity has lit a fire under my ass. I can no longer pretend that my writing doesn't matter.
﻿ 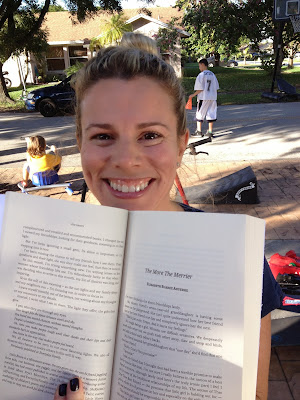 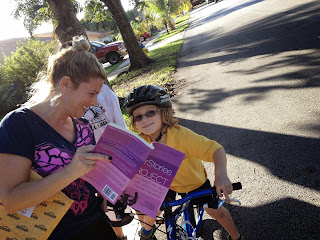 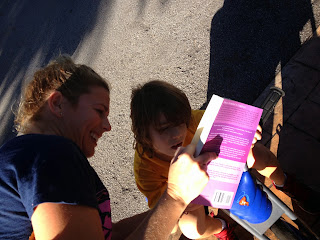 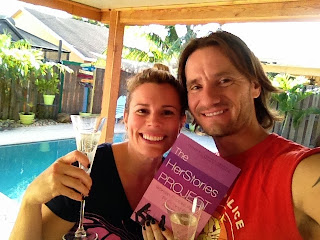 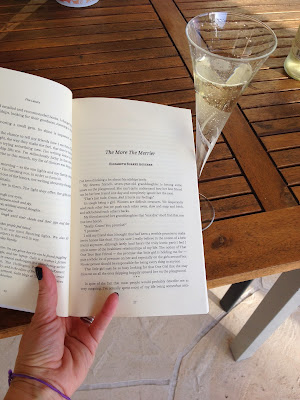 To buy the book, click HERE or on the book's Amazon link at the top right corner of the page (pretty please?).

Learn more about the book, how it all started, the editors, and the rest of the awesome women writers featured at The HerStories Project. And please help us spread the word....tell your friends and family about it. The book really is a frickin' awesome collection of essays on "the joy, pain, and power of female friendship!"
Posted by Liz Aguerre at 12:01 AM 12 comments: