Even his arrival was dramatic... 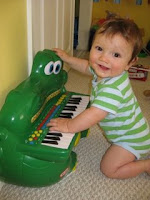 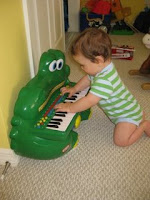 It's amazing how you can block something out of your memory.


Earlier this week, while I was at work, a friend was showing me pictures of her sister's new baby. While clicking quickly through the pictures, one face stopped me short. It was a picture of my friend's sister holding her baby, with the hospital nurse standing next to her bed. It was the same nurse who tended to me when I delivered Aidan Kai almost exactly 9 months ago. She practically saved my baby's life and I never even sent her a thank you note.

When Aidan Kai was born, I had a cord prolapse, which is so rare that when doctors and nurses would come see me in the hospital room later they'd greet me excitedly with "Hey! You're the prolapsed cord girl!" Yeah, apparently, if there is less than a 1% chance of it happening, it's gonna be me. I'm the freak of nature. Fabulous. In really simple terms, a cord prolapse is when the umbilical cord manages to get ahead of the baby's head. It is extremely dangerous to the baby, and can result in brain damage or even stillbirth. There was absolutely no way of predicting that this was going to happen. One moment I am lying in my hospital bed, epidural in place, dilating happily, chatting with my hubby and my friend...next moment the nurse is literally ON TOP of my bed, her hand holding my baby's head up and away from the cord (yeah, it was as graphic as it sounds), yelling and screaming for doctors and more nurses. It was just like one of the scenes on a medical drama on TV: beeps and alarms and people rushing in from no where, yelling and screaming medical jargon you don't understand. It was, by far, The Scariest Moment Of My Life. I was wheeled to the O.R. for an emergency c-section with the nurse still on my bed, and Aidan was out in less than 7 minutes. I found out later that the nurse did not remove her hand from Aidan's head until the doctor had cut me open, had him safely in her own hands, and told the nurse it was okay to take her hand out. I will never forget the sound of his cry when he was first taken out or the look on my husband's face when we both heard it. "Relief" does not even begin to explain it.

Over the next 24 hours, I told the story a few times, with the few details I understood at that point, and some family members were amazed by how calm I was after such an ordeal. As days went by, however, I learned more about exactly what had happened. I asked the doctors questions, I read a little online, and spoke to some people. By the time Aidan Kai was a week old, I never wanted to think about it again. I had to completely block out the memories of his birth, because once I had had time to settle down, take a breath, and think about what had actually happened--how close we had come to losing him--I literally could not deal with it.

Looking back, I think the experience definitely clouded my first weeks postpartum. I was not only recovering physically from the experience (it was not, in the continuum of c-section experiences on the "easy" side), but emotionally, I was also a wreck. I kept having flashbacks of the sights and sounds of the operating room, the shouts of the doctors, my parents' faces as I was wheeled passed them, and that nurse's face.

When I saw that face in the picture the other day, it brought it all back. And last night, while holding a sleepy Aidan Kai in my arms, tears came. Not so much tears of pain or fear, but of gratitude that this little creature managed to make it into this world, into our lives, not only alive, but KICKIN'...and I can not imagine what our little family would have been without him. And now, that I'm done with this post... that I've allowed myself to think about this and relive this in my head for the first time in 9 months? I'm going to write that nurse a very long thank you note.
Posted by Liz Aguerre at 3:45 PM