Happy Birthday...now go to time out!

So I crossed over to the Other Side. I did it. I became One Of Those Moms. Goodie bags and all... 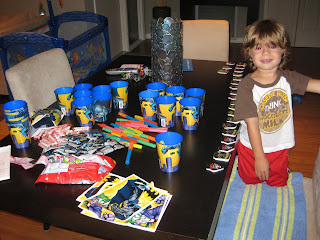 We threw Ben his first "real" birthday party: rented location, invitations, and yes, goodie bags. The whole idea started because this was his first birthday since he'd started school, and he wanted to invite his classmates.
"Let's keep it really simple," we said.
Yeah. Simple. Really simple.
Sorta.
Like just about everything else about motherhood, the birthday party situation did not quite turn out the way I had expected.
I thought Party Day would be...
1. Easy
2. Cheap
3. All-out excitement and happy hysteria from Ben
Instead, it was...
1. A tad difficult (Why the hell can't people RSVP?)
2. Expensive (Who knew goodie bags could run you the equivalent of a good pair of stilettos on sale?)
3. Some excitement (He basically went from gift to gift with little to no reaction)and not necessarily the happy kind of hysteria (He ended up in time-out DURING his party)
I think, in part, it was the inexperience of 2 parents planning a party for the first time. He was tired from having gone to bed late the night before and we scheduled his party way too late in the day. He was over-everything: over-tired, over-stimulated, and over-whelmed.
And somehow, I got caught up in it all: not only did I obsess over the silly little goodie bags, I made Hubby and Little Brother (and me) wear matching Batman shirts to go with the theme. 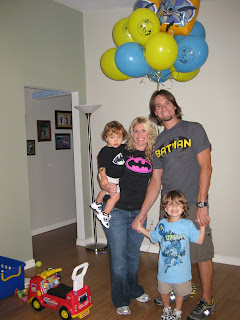 Yeah, I gave in. And wonderful man that I'm married to, he allowed me to pull him in right along with me. So we WERE those cornball parents with the thematic outfits, yelling and screaming at our birthday boy for not "being nice" to his guests, jumping around in the bouncehouses along with the kids.
We used to be cool, I swear.
Posted by Liz Aguerre at 10:29 AM