Most of the athletic events I've participated in have had some sort of psychological meaning for me. I can't remember even one race I have done "just for fun" (even when I said I was). I'm just not real big on the whole imposing physical punishment on myself for fun. I mean, don't get me wrong. I go to the gym religiously. I sweat. I strain. I run. I mountain bike. And I like all of it, but it has to have some other kind of purpose for me. I mountain bike because it scares the crap out of me. I run because it clears my mind. I go to the gym because I like how strong it makes me feel...yeah, physically, but in my head, too. That's where it counts for me. All the physical stuff has to have a mental pay-off for me.

When I did a 5k last December, it was to prove to myself that I could do one right after having a baby (okay, not right after, but as soon as my doctor gave me the OK). It turned into what I called my "3 in 4"...as in "3 miles 4 months after delivering via c-section."

So when I did a 5k this past weekend, it wasn't just for fun. I said it was, initially. I said I was "just curious" to see if I'd gotten better over the last year. But really, I wanted to see if I could beat my best time, back before I'd delivered 2 human beings. And guess what? I did. I even came in 6th in my age category...a total first. But the best part wasn't that. The best moment happened at the starting line.

Now you all know that I'm not particularly mushy about motherhood (most of the time), but I definitely had a mushy moment at the beginning of that race. Just a few seconds after I started running, I looked over to the sidelines and spotted them: My Boys. All of them. Daddy, camera in hand (as if I had not done about 20 of these in the past few years). Ben, his 4-year-old face scanning the crowd of runners. Even Aidan Kai, content in his stroller, eagerly watching the crowds and commotion.

I saw them before they saw me, so I had the chance to watch them for a few seconds. There they were, all 3 of them, looking for me. Me. And when they spotted me, they started yelling: "Mama! Go Mama!" Even Aidan's little face lit up and he started giggling and flailing his whole body when he realized who that particular runner was.

And I was shocked to discover that I was moved. Moved! Me! I even got teary. I mean, seriously, what the heck is that? Didn't you read my last post???

But yeah, I have to admit that the sight of these three "men"--my men--standing there, looking for me, cheering for me, there for me...it moved me. And I was immediately reminded of another race in my past...one definitely taken on for mental and emotional reasons.

Before I had Ben, Hubby and I had spent almost 2 years trying to get pregnant. And when we finally did, we miscarried. It was the single most devastating moment in our lives. And I knew, right then, that if I did not turn that into Something...if I did not Do something with that pain...it would consume me and I would crumble. So I chose to run the Disney Half Marathon, simply because it gave me something to do, something to think about, something to plan, and running was my escape. Running is what makes me feel strong. And I needed, desperately then, to feel strong.

So this past weekend, while I ran my little 5k for best time but disguised as fun, and I looked over at those boys...the one who got me through all of that devastation then...the one who dropped onto the bedroom floor and cried with me...the one who has been at every single one of my Important Moments cheering me on from the sidelines...standing there with these two little boys we made together...well, it was enough to make even a non-mommy-type like me go soft. 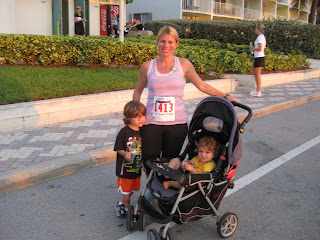