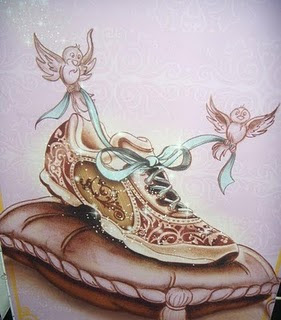 I started running to get away from an unhappy life. It was my escape--literally--out of "that house" and gave me an excuse to be by myself, to do something for me. I had never been athletic. I was one of those kids who got straight A's in every subject but begged the PE coach to "give me a D and just let me sit out." It wasn't that I couldn't do the things they wanted me to do; it was the discomfort I felt being watched while I had to do them. (I will not even get into the horror I felt whenever I'd come out to phys ed and see the Shuttle Run set up.)
But running was easy...not so much physically, since I literally couldn't go longer than 2 minutes at first without feeling like I was going to die...but emotionally. All I needed was a pair of sneakers and my headphones, and to just go: put one foot in front of the other. The results came quick and were easy to measure: At first, I just went around the block, running the corners and walking the straight-aways. Within a few days, I could run the straights and just walk the corners. Before I knew it, I was running 10 minutes straight. And then...my first 5k. Up until that moment, when I crossed my first-ever finish line, I had never ever been so proud of myself. A year or so later, I started toying with the idea of a half marathon. When I mentioned it to my nears and dears at the time, most of them scoffed, pointed, and ridiculed outright. "13 miles? You? There's no way."
Another year (and one divorce later), I crossed the finish line at the 2001 Walt Disney Half-Marathon.
Although there was no longer a need to escape my life, I kept running...although my distances rarely went over 3 miles.
Then in 2004, after nearly 2 years of trying to get pregnant and 13 weeks of a joyous pregnancy, Hubby and I had a miscarriage.
Devastation.
After a few weeks, I knew I wasn't getting "passed" it. Rock bottom was starting to feel pretty damn close, and I realized that if I didn't "do" something, I was going to drown.
So out of nowhere, I decided to go back for another Disney Half with the goal of improving my previous finishing time. Over the next 4 months I focused completely on this race, my training, and my fitness. It gave me something to do. It gave me an outlet for my stress, my thoughts, my emptiness.
At the expo held the day prior to the race, one of the vendor booths was set up for little kids to make signs to hold up during the race. I stood by and watched little girls and boys making banners with puffy paint and sticky letters and markers: "Go Mommy!" "You can do it, Daddy!" "We love you!" Surprisingly, I didn't break down then. I turned to Hubby and said, "One day, I'm gonna come back to do this race, and my kids are going to make signs for me."
The next day, I ran a good race and did beat my previous time, in spite of having a very upset stomach and a lot of nausea the whole way. When we ran through the Magic Kingdom and passed the Dumbo ride, the tears finally came. I mourned, right there on mile 9, for the loss of this little spirit, this baby that wasn't to be, this dream that had been shattered.
I came home and found out a week later that I was pregnant. Ben Kincaid was born on September 16, 2005.
A couple of years after having him, we decided to try again, hesitant and fearful that we'd have to go through another difficult time.
We got pregnant with Aidan Kai on the first try. He was born August 8, 2008.

* * *
Now, I'm going back.
I registered for the Walt Disney Princess Half Marathon, February 2011. A decade after my first big race, and 7 years after crying at mile 9, I will be running for my kids and for myself. We'll go back to the expo and watch Ben and Aidan make "Go Mama!" signs. And when I cross that finish line, this time by myself, I'll run into the arms of My 3 Men: the one who has run along beside me literally and figuratively, and the 2 little ones who came to join us, the ones who made me Mama.
Posted by Liz Aguerre at 8:38 PM