Wave "Bye-Bye" to the Crib: Another chapter in the baby book closed

The finality of it startled me.

I had been struggling to untie the knots holding the crib bumper in place.


I had not been contemplating.
I had not even given it a thought. Then, there it was: the finality. My youngest (and last) had slept in his crib for the last time, and I had not even known it.

We knew we were just about ready to get rid of the crib. Aidan Kai had been asking for "a big boy bed" ever since we had made the suggestion, weeks ago, when big brother Ben had gotten a loft bed as a hand-me-down. The only thing we had been waiting on was finding the time to paint and assemble the new bed, so we could transfer Ben's old one over to Aidan's room. When we found ourselves with an unexpected day stuck at home (due to a week-long sibling-shared virus), we figured "May as well."
So we built the new bed. We moved the old Big Boy Bed into Aidan's room. Hubby went out and bought the new mattress. I took Aidan Kai to Target to pick out his First Ever Big Boy Sheets (Lightning McQueen).
Even when Hubby texted me that he was "soooo sad" about getting rid of the rocking chair to make room for the new bed, I didn't think twice about it. In fact, I was a little surprised by this unexpected sentimentality, he being the one of us who is always, always looking forward; never, ever missing the baby stage; rarely reminiscing. I shrugged my shoulders at the text, thinking the rocking chair (the same one we've sat in night after night to rock and sing and read to at least one of our boys for the last 6 years) was kinda dingy and banged up and a mess, anyways, so really, what was the big deal?
Then I got down to the frustratingly difficult task of the knots on the crib bumper...the bumper we debated purchasing for so long with our first baby...the patchwork quilt Pottery Barn bumper with the maps of Hawaii and the little palm trees...one of our little splurges for our first nursery. And there it was, in the middle of a particularly stubborn, manicure-ruining knot: the realization that we would never again have a crib. We would never again pour a sleepy little boy, rag clutched tightly in his tiny fist, into a crib. We would never again walk into a room, sleepy and bleary-eyed and wishing we could just be left to sleep a little longer, to find a little boy, too eager to wake up, too eager to play, too eager to start his day, his little arms outstretched in the air, asking to be "out," out of his crib.
When the boys were littler, we were always half-wishing that we could fast-forward...get through Whatever Tough Stage we were in: newborn, colic, diapers, 24/7 clinginess. We are usually pretty good about moving on, getting to the next stage, starting a new chapter. When we donated the high chair, we nearly threw ourselves a party.

But we are loving this stage now, where we can really talk to our oldest, see him turning into a little person, a real contributor to this family; but still enjoy having a little one among us...no more diapers, but just enough baby fat and fumbling and cuteness to make him The Baby. So now, all of a sudden, we don't really want time to move on. We don't want them to grow up much. We don't feel trapped anymore, in this thing called Parenting. We, apparently, have grown up right alongside them. 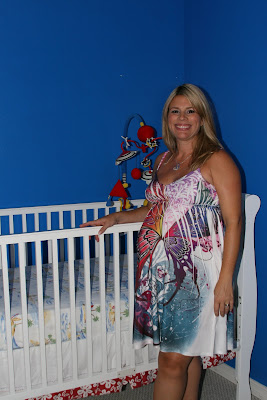 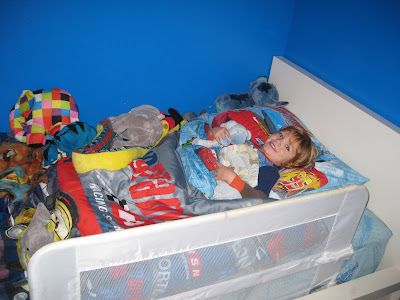