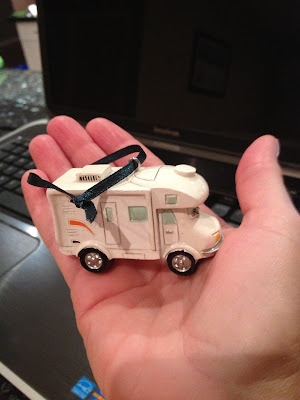 Let it be known that I own one pair of Jimmy Choos pink stilettos (paid $533 on sale during a 30th birthday trip to New York). I own a pair of vintage Prada slip-ons (thank you, Gil). Then there are my Lanvin patent leather lace-up bootie stilettos, bought in a tiny little consignment shop in Paris that required you to ring the doorbell in order to enter. These precious possessions sit in my closet, nestled happily, organized by color and heel height, amongst many other pairs of Fabulous Shoes.

I say this all in order to point out the fact that I really am not a simple girl. I like my fancy stuff. I know my designers. I covet.

So it came as no surprise when friends and family expressed some doubts when I told them we were buying an old RV.

"You? In a mobile home? Camping?"
Uh, hello, people, I have been camping many times, thank you very much.

"You? In a mobile home? You know you have to be flexible with those kinds of things, right? You could break down in the middle of nowhere."
Uh, hello, people, cars can do that, too.

"You? In a mobile home? Don't you usually like going to big time resorts for vacations?"
Uh, hello, I can do casual, too.

Apparently no one did, because even the dealer who sold it to us gave me one look up and down (literally) and stated: "Have you ever even been in an RV?"
(The answer was yes, actually, asshole, I drove one double the length of this one for 3 days while my husband raced his bike around Central Florida during a multi-day event.)

I don't know what all the fuss was about. Most people who know me know that I own as many pairs of flip-flops as I do heels, and at the end of the day, I would rather be in a pair of torn up shorts, with salt water in my hair, and a slight sunburn than in my best outfits.

But--although I never admitted it--I was a little bit skeptical too.

I had never traveled in an RV for vacation. I wasn't big on road trips. I get car sick. I wasn't sure I'd have that much in common with the people I expected to meet in RV campgrounds.

But once Hubby told me there were beachside campgrounds and compared the costs of traveling with the boys in an RV versus an airplane, I was in. Besides, this was one of Hubby's Big Dreams. I had to give it a shot.

And all it took was one weekend.

Of course, most people still thought it was the novelty of it all: that once I spent more than just a couple of days in that thing, the four of us traveling around, doing the work required to set up camp, cook, clean, maintain things, I would realize that I was, in fact, most definitely not an RV Girl.

When we packed it up to go on our first long road trip last summer (9 days), I figured that would be the ultimate litmus test: Would I be dying to get home mid-way through the trip?

Nope. In fact, on day 9, I was bummed that it was over. There was no sense of claustrophobia, exhaustion, or that feeling of I'm-so-sick-of-this-tin-can-shit.

Over the course of nearly 2 years, we went on about a dozen trips: from local little getaways in parks near home, to our 3000 mile trip this summer. I don't think I was ever happier or more peaceful than during those trips. Hubby even bought me a little mini RV keychain. He told me to put it in my pocket, because he liked the girl I was when I was in the RV even more than the regular me. There was just something about that lifestyle--the simplicity of it all--that did something to me.

I was surprised by how much I loved the RVing lifestyle. It was all very different to the kind of traveling I was used to. Usually, my trips involved a frantic pace, a long list of Must-Do's and/or Must-See's, a very rigid agenda, and an even more rigid list of expectations. With RVing, it was the exact opposite: the pace was unhurried, the itinerary was flexible, and the only Must-Do's were hiking, playing, barbecuing, and drinking wine.

The people you meet along the way are all happy and pleasant and relaxed. And although there were some highly amusing stereotypical encounters (have you ever seen the movie "RV" with Robin Williams?), for the most part, it was a great mix of people: lots of retirees, some young families, groups of friends. During one trip, we met a grandpa who lived in the swamplands of Central Florida and had taught his 8-year-old granddaughter how to shoot gator. The adorable blond, blue-eyed little girl gave us some fried gator tail to try (I passed, but Hubby and the boys all swore it tasted just like a chicken nugget). During the same trip, we met an Italian family, and my two little boys taught the 12-year-old boy from Rome how to skimboard. Another time, we showed up at a park and learned it was "Bikers' Weekend." We camped out next to a group who wore leather the entire time, had motorcycles parked next to their RV, were covered in tattoos, and smoked constantly. One of the men was about 7 feet tall and slammed a log as thick as a telephone pole into the ground in order to break it apart for firewood. On our last day there, they came over to make small talk with Hubby, telling him they couldn't believe he mountain biked because "now that is dangerous!" and revved up their motorcycles so my boys could hear the roar.

The dealer who sold us the RV told us that when you're camping, you could be parked next to a serial killer, but in the campground, he'll read his newspaper and mind his own business. It doesn't matter who or what you are in "real life." When you're sitting next to your RV, you're a camper, like everyone else, and everyone is there for the same reason: to relax and check out of life for a while.

My boys learned to climb trees and shower outdoors and play with kids who didn't speak English or with kids who ate gator tail. They learned that every family is different, and that when bad stuff happens (the RV breaks down and you're on the side of the road for 9 hours), you make the best of it. We played Frisbee barefoot. We looked for shooting stars. We threw rocks in canals. We saw raccoon eyes glow at night. We talked. We learned that a hammock can hold all four of us--but only for about 3 minutes.

We sold the RV today. There had been too many mechanical issues to keep it any longer. And although we plan on getting another one, we know we won't be able to for at least 2 or 3 years. That doesn't seem like a very long time to wait, but it means that by the time we get another one, Ben will be a pre-teen, and Kai will be 8 or 9. I can't imagine not being able to sneak away for a weekend here and there, not holing up in it and driving 10 hours to see a new place. Today when we emptied it all out before turning over the keys and the title, Kai kept asking: "But are we bringing the RV back home?" We realized that he was so little when we got it, that he doesn't even know life without an RV.

I realize this might all seem a bit melodramatic. It's just a vehicle, for pete's sake. Just go camping in a tent. What's the big deal?

It's not about the RV itself. It's about the lifestyle. We feel like we have temporarily given up our freedom. We are not simple people. I am most definitely not a simple girl. But we loved the simple life that our RV gave us. And even though, for now, I don't have one, I am still most definitely an RV Girl. 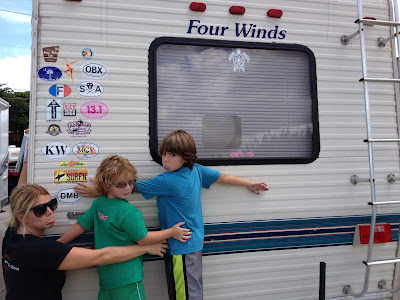