My kids are badasses.

This is not motherly bias.
It is fact.
And I don't mean sorta-brave, tough little boys.
I mean full-fledged, no-fear badasses.
If I had better wi-fi, I'd upload a couple of videos here instead of pictures to truly prove it, but unfortunately, I am dealing with campground/on-the-road/in-between-mountains kinda internet service. I'll be lucky if I can get this post completed at all.

We went to Loon Mountain Adventure Park in Lincoln, New Hampshire. And I admit I thought perhaps this side trip to NH was a little unnecessary since we were no longer going to continue on to Canada, and really, how good could this park be that we are going to spend nearly $300 to climb some trees and swing from some ziplines? Well, once again, Hubby proves that he is The Man when it comes to research and planning, because it was one of our best days of the trip. The park is a ski resort in the winter and is converted to an adventure park in the summer. It has activities like mountain biking, rock climbing walls, a log maze, bouncing bungees, and gondola rides up to the summit where you can explore caves. But the main attractions are the Aerial Forest, where you climb and traverse along ropes and bridges suspended anywhere from 9 to 40 feet in the air; and the Ziplines, where you zip 750 feet across the Pemigewasset River.

We arrived when it opened and did not leave until closing time. Four of the hours were spent in the air and in the trees in the Aerial Forest. There were various levels, but I was pretty shocked by some of the stuff on the two easiest courses. When we first got there, we were most apprehensive that Aidan Kai, our 6-year-old, was going to freak out and we would have spent all that money for this ticket for nothing. He kept saying that his heart was “beeping” really hard in his chest. Once we were taught how the safety harnesses worked and how to clip in and out of the different ropes along each platform, we were set free to play on our own. (There were employees on the ground that you could call for help, but once you started, you were on your own.) Both Ben and Kai got the hang of it faster than I did, in spite of the fact that I had done some ropes stuff in the past. And as for Kai’s “beeping heart”….that kid did not hesitate once. I will admit that there were two times I was so intimidated, I wanted to cry (literally), and probably would have chickened out if the boys had not been there. At one point, I stood on this platform that was who knows how many feet up in the air, trusting that these two harnesses were going to stop my fall if I messed up, and faced a trapeze-like swing, which was the only way to get across and onto the other platform. I was terrified. But what could I do? If I chickened out first, the boys would never try it after me. If I let the boys go first, I’d be scared for them and wouldn’t be able to let go of the fact that I couldn’t do something my 6-year-old could. So I did it. And it was way more fun and less scary than it had looked.

After the ropes course, we went over to the infamous Zipline. I had done ziplining before while on vacation in Hawaii, so I knew what to expect. What I had not realized, however, was that when you are a mom and you are placing your children’s lives in the hands of some mechanisms and people you don’t know, it is very, very scary. Those two little ones climbed the steps of those towers, stepped onto the platform, looked down at the river, and ran off and jumped without a second’s hesitation. And rather than hold on (for a false sense of security, really) to the yellow lanyard attached to the harness (which I did—with a death grip--on my first zip), Aidan Kai waved at us and arched backwards, arms and legs extended, and Ben flapped like a bird and then flipped himself upside down. I have always loved this sort of stuff, and never gave it much thought when traveling back in the Before Kids Days, but it is a whole new level of stress when you have your kids doing these things.


After the stressfully thrilling first half of the day, we spent the rest of it bouncing and climbing and riding up to the summit, playing in the glacial caves at top, and beating the kids in a "friendly" maze race. 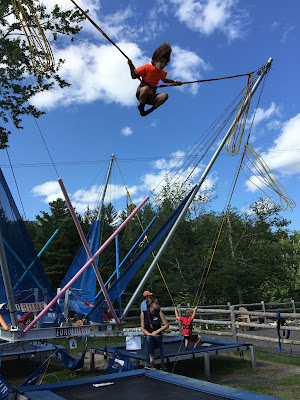 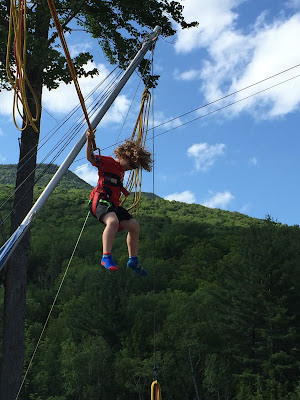 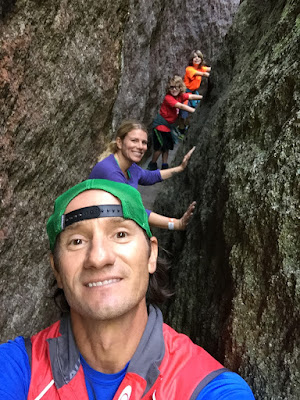 It was an awesome day, and worth every penny and drop of (my) terror-induced sweat. This was the sort of stuff that we would talk about when they were babies: doing fun things with them as a family as they got older and could do more. Watching the boys (especially Kai, who has historically been the one to panic at the last minute with activities) go out there and have fun, learn how to do scary things safely and correctly, jump off those platforms and soar…it was just awesome. This was definitely a family day filled with adventure.

My family is badass.


Next stop: Charlottesville, Virginia.
Posted by Liz Aguerre at 11:31 AM