Not to toot my Mommy Horn, but...TOOT!

Hubby and I have a lot of in common. We both like to do a lot of the same stuff, but there are certain pursuits--which although shared--still "belong" more to one than the other. As much as I enjoy it, cycling is "his." It is part of who he is. It is what he does. So when Ben's 2nd Christmas rolled around and he was just over a year old and Daddy wanted to get him a "real bike" as his first bike, I was okay with that. I did not care that the kid could barely reach the pedals of his tricycle, or that the chosen bike cost more than most of my friends' adult bikes. And when Ben woke up on that Christmas morning and saw IT under the tree, a big bow on top...he did not seem to care that he could not really ride it yet, either. The look on his face was raw joy. 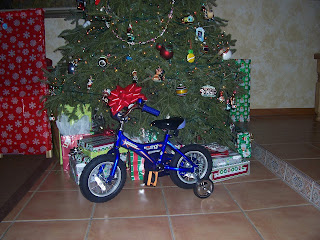 Fast forward to today...our baby Ben is no longer really a baby. And he can reach the pedals. And he can ride. And as of this week, he can ride with NO training wheels. It took this usually cautious, often slow-to-try-new-things little boy all of 10 minutes to figure this out... 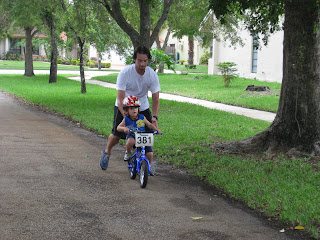 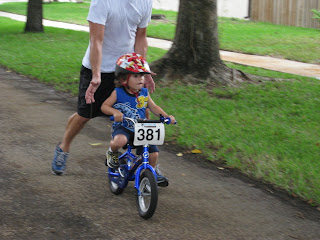 By the third day, he had suffered two major spills ("I'm OK! I'm OK!") and was riding up and over homemade ramps (his idea). I asked Daddy, "So...is this your proudest Daddy Moment yet?" "It's up there," was his response. "It's up there."
Biking might be Daddy's thing (and I do love it), but I have a few "things" of my own. Reading is definitely one of them. I have been the quintessential bookworm since 2nd grade, when I met Ramona Quimby. We used to joke that since Ben was a toddler, his three favorite things all started with the letter of his name: balls, bikes, books. He was under a year old when he threw his first mini-tantrum because I would not read him another book. We have read to him every single day of his life since the day he came home from the hospital. So, like biking, he has always loved books. But this week he decided he wanted to make a bookmark "like Mommy's" and he wanted to read "a long book" so he could use his bookmark and he knew exactly which one he wanted to read: the chapter book about the bike race that had been sitting on his bookshelf, waiting for him to get a little bigger so he would be ready for it.
So I humored him the first night, thinking even if we did not really continue the book, at least he was beginning to understand the concept. But tonight, after his PJs were on and his teeth were brushed and he asked the infamous question I dread every other night: "Tonight, is it Daddy's turn to read books?", instead of trying to convince me to let Daddy have an extra turn, or whining about how he "waannnnttteed Daddyyyyy to read books toniiiiight..." he started jumping up and down, cheering, "And tonight we're gonna read more about the race across America!" And sure enough, after a short recap from the night before, we went on a few more chapters and talked about the story and the characters and slipped our homemade bookmark in the book and I had to promise that we'd keep reading tomorrow night. 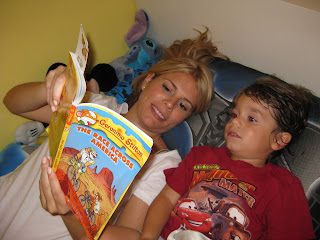 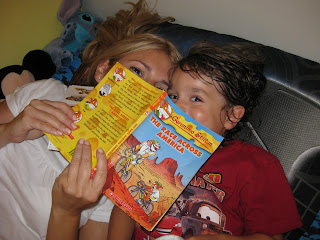 I have no idea what he'll be when he grows up. I don't know if he will be like us or swing completely in the other direction. And we are very, very careful about letting our boys grow up to love and do what they want. Whether he contines to love the same things we do or not, we will be there...cheering him on, sharing in his joy and his pride in whatever it is he loves to do. But for right now, within this tiny sliver of our lives as parents, we have our little Dream Boy: cyclist by day, book geek by night. A 2-wheeler. A chapter book. All in the same week. We are a long time away from that baby boy in Christmas PJs who couldn't reach the pedals... our First Baby, our First Boy, our Ben...the one God made us wait for once upon a time...is growing up.
Posted by Liz Aguerre at 10:00 PM