How many toys does one 3-year-old need? 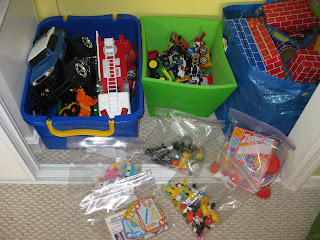 I don't know what came over me. You know how, every once in a while, you have a sudden urge to clean out your closet or reorganize your drawers? Well, I kinda got that urge this morning...but towards Ben's toys. And I don't mean I organized a bit. I don't mean I picked up here and there. I don't mean I got rid of a couple of things. No, I went through every single toy he has. I sorted them by categories. I put all those God forsaken attachment pieces and figurines in ziploc bags. I resorted every one of his books. Wait. There's more. I (don't laugh) went through every single marker he has (okay, you can laugh). I actually sat at his little kiddie table and took the time to open every single marker, test it very officially on a scrap piece of paper, recap it, and either deem it worthy of staying in the marker box or toss it in the garbage. I know. I'm a dork. I'm also a bit Type A. Just a bit. Okay, maybe more than a bit. And although I have not looked in my friends' children's closets, I KNOW that they, too, have all had days where things get so cluttered, so out of control that they literally can not shut the closet any longer. That's how it had gotten in Ben's room, anyway. And so for a few weeks I had pretended it didn't bother me...this fact that the closet door would have to stay permanently opened because there were giant balls and Hot Wheels tracks jutting out. I pretended it didn't get under my skin when, everytime he wanted to play with something, we could not find the pieces required because some were in his infamous closet, others in the family room bins, and others still under the sofa. And let me say this: Ben's a pretty tidy kid. You see, much to my extremely laid back husband's chagrin, Ben seems to have inherited some of my Type A quirks. And for the most part, we do require him to clean up after himself. But there is just so much Stuff. And the Stuff all comes with More Stuff. Toys are no longer one-piece items. You no longer buy, for example, a Pirate Ship. No, the Pirate Ship comes with 32 pirates, 6 treasure chests, 23 swords of various sizes, and 61 random pieces of crap that you can attach and unattach for, supposedly, "hours and hours of fun." As anally retentive as I can be, this means that I need to buy ziploc bags in bulk.
I've done this a couple times before, but each time it had been A Project. I would sit down with Ben and tell him how we were going to organize his toys, how we were going to pick some out to donate to needy children, how we were going to critically think about the best ways to sort them all. It was going to be not only a cleaning up activity, but a Life Lesson. Yeah. Ha. You all with children are not only laughing now, you're pointing too. So today it was not a project but a Covert Operation. I did it...behind his back. That's right. It took me a couple of years, but I caught on. I sorted, tossed, donated...all without distractions, all without "Hey, let's play this!", all without "But I need that!" And then I hid the garbage bags and when he got home presented him with the "great news" that all his toys had been organized and put away so he "could find them easier and play so much more!"
And you wanna hear the funniest part about all this? I actually enjoyed it. I did. It felt good to sort, to organize, to toss. I felt accomplished. This is what parenting can do to you...turn a person with a master's degree into someone who feels successful after sorting Matchbox cars, Legos, and fireman figurines.
Posted by Liz Aguerre at 2:06 PM