Find your joy and you find your Self

"Celebrate we will
for life is short but sweet for certain."
~Dave Matthews, "Two Step"
. 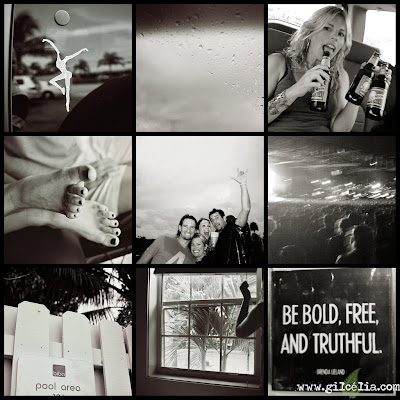 A year ago, Hubby and I went to a Dave Matthews Concert with friends. The skies poured down for hours before the show and turned the open-air lawn into a muddy, slippery, soggy mess.

It was the first concert I'd been to in a long, long time. I stood there, listening to my favorite band, Hubby swaying behind me, his arms wrapped around my shoulders.

That night was a turning point for me. It was the first time I felt like Myself after having had my second child. Standing there, high on the music and the beer and the company, I was happier than I had been in a long time. It was like I remembered...

I remembered who I was.
I am not sure why, but I can tell you I felt Free.

Fast forward to this past weekend. We went back to see Dave in his Summer 2010 Tour.

As much as I had been looking forward to the concert, I was a bit worried that I'd be disappointed. I didn't think it would be possible that I could feel "that" again. I thought, surely, it had been a product of a weird time in my life, a time when I was just coming out of a year blurred by colicky cries, sleepless nights, and postpartum weight.

And maybe, just maybe, I had thought, I had even been a tad bit drunk last year.

There it was again: the feeling.

Again, brought upon by the music, the lights, the night, the company.

It's easy to pass on stuff in life. When you have small kids and large bills, it's easy to say: "No, we're not going to do that right now, because babysitting is tough/we really can't afford it/it's too far/it's not necessary/we're too tired/too busy/too everything."
But then you forget. You forget who you are, what you love, what makes you feel most like You.
Posted by Liz Aguerre at 10:49 PM